There’s more than a touch of magic in the air at this fabulous year round Christmas shop, home to Santa Claus’ official biographer!

Scroll down to find out more… 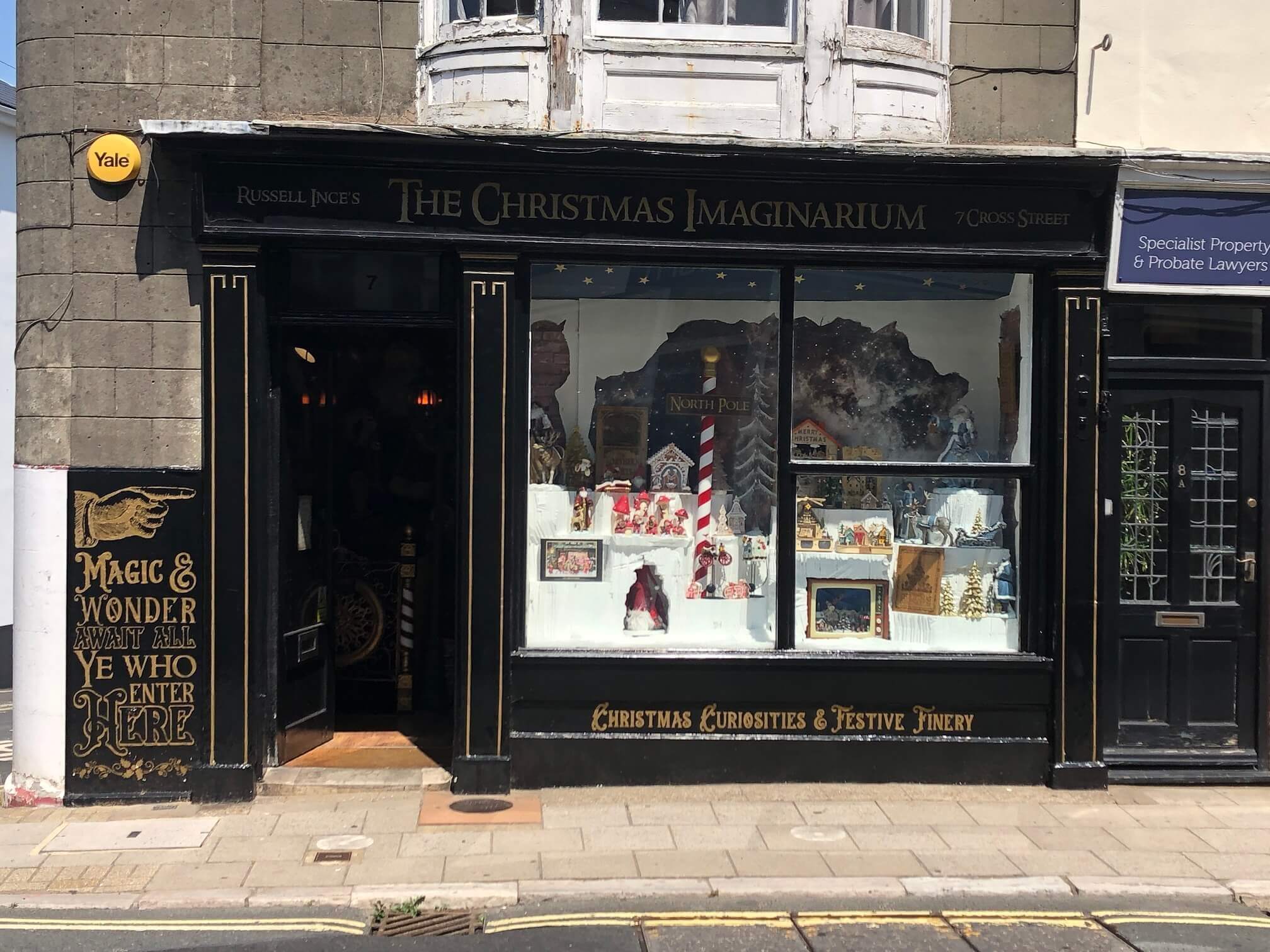 You can tell immediately that this is a year-round Christmas Shop with a difference.

The shop is dark and intimate with a definite sense of magic in the air.

As you walk through the door you could be forgiven for feeling as if you’ve discovered Narnia hidden amongst the more ordinary shopfronts in this coastal holiday town.

Except in this Narnia, it’s always Christmas, even if it isn’t winter.

Run by Russell & Claire Ince, The Christmas Imaginarium is the realisation of a decade’s work in Christmas product creation.

Russell is in fact Santa Claus’s official biographer and has penned a whole host of books and magazines on behalf of the Big Man himself, starting with Santa Claus: The Book of Secrets.

An utterly fascinating gent with an extremely vivid creative mind, Russell then began developing Christmas decorations and ornaments, some of which can be found on the shelves of Harrods, Selfridges & Fortnum & Mason.

And so it was a natural progression for the couple to open the doors to their very own winter wonderland in July 2018. 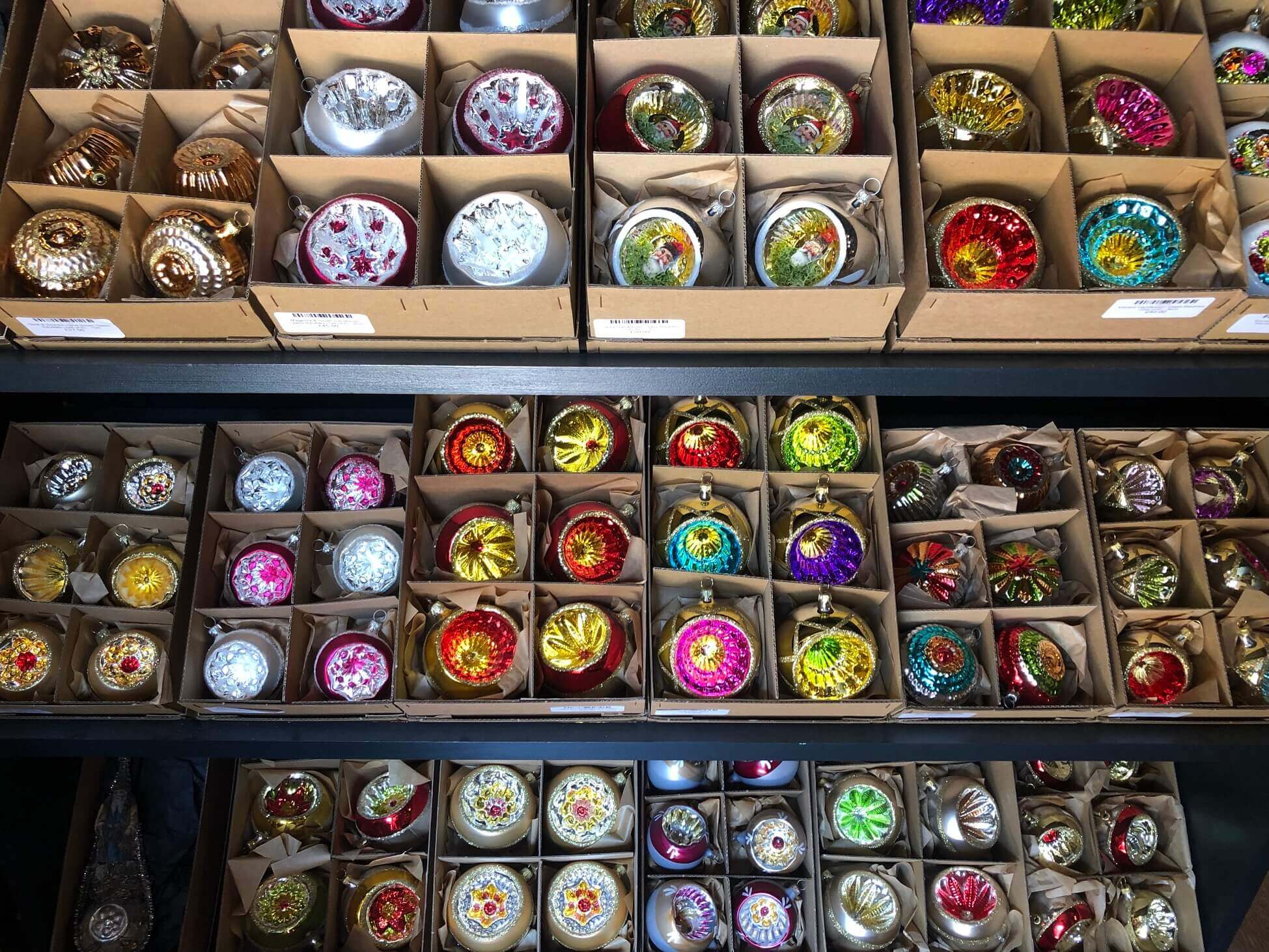 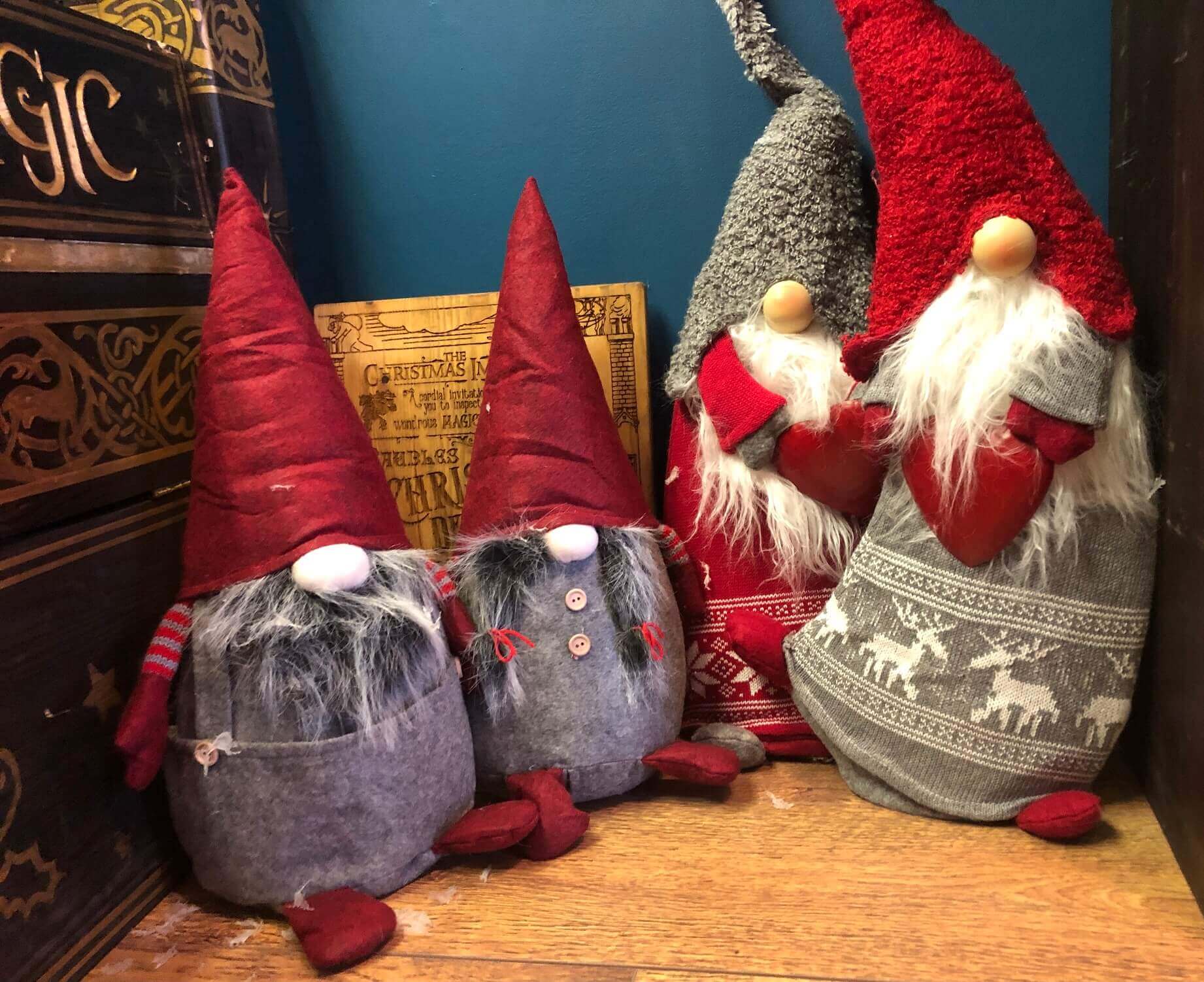 From fabulously cheerful vintage baubles – hand-blown and hand-painted in Germany from the original moulds – through to eccentric glass busts of everyone from The Queen to the Dali Lama and a bespoke jigsaw puzzle of the storefront, there is truly something for everyone.

And Russell’s portfolio of books rightly take pride of place encased in a beautiful wooden Christmas market stall (complete with snow!), crafted by Russell himself. 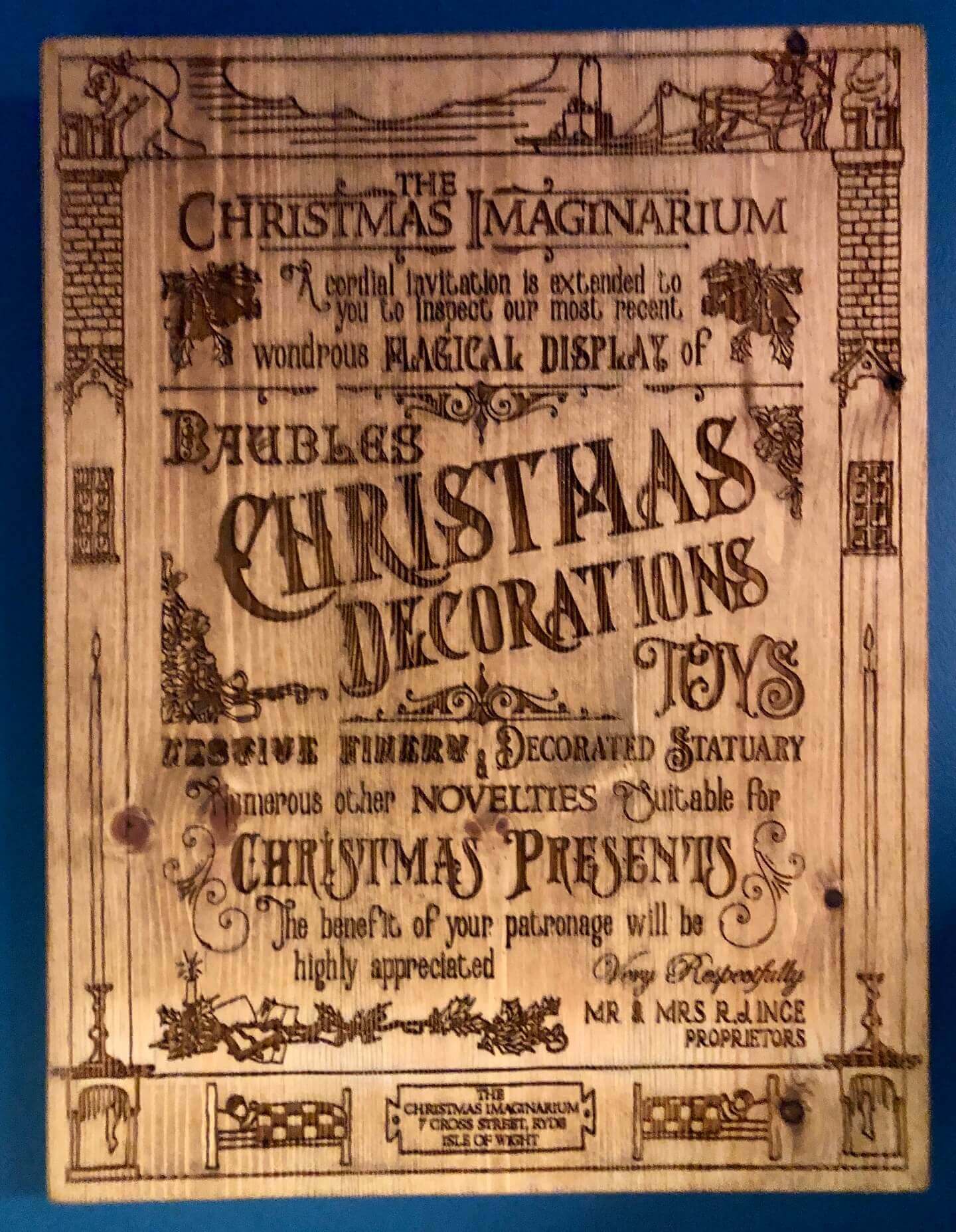 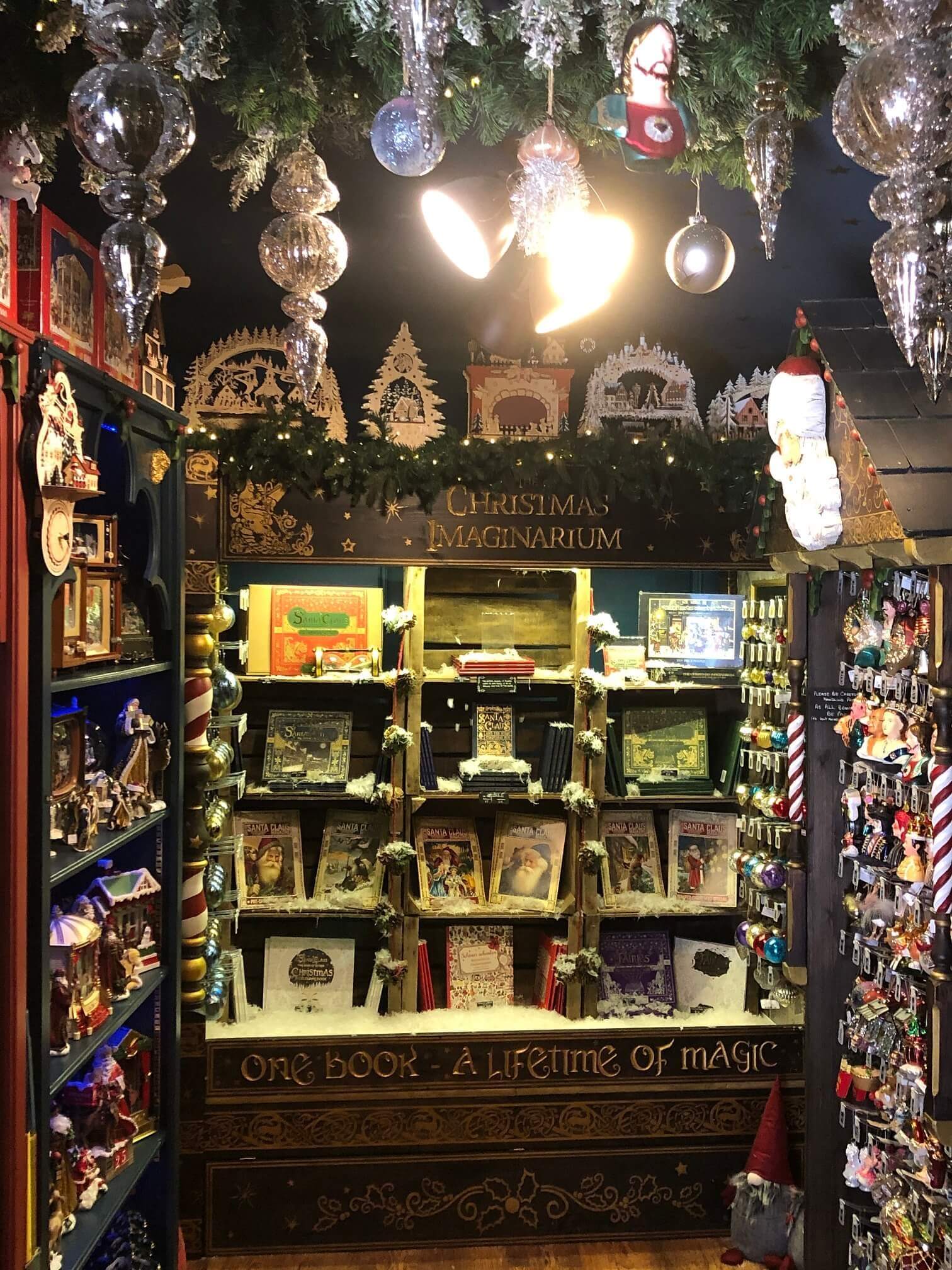 Clearly his furniture-maker father’s skills rubbed off as The Christmas Imaginarium is dotted with beautifully handcrafted wood signs bringing themes from the Book of Secrets to life around the store.

And the magic touches just keep coming.  ‘What’s this?’, I asked, my eyes transfixed by a huge metallic contraption that looked as though it had been lifted straight out of Willy Wonka’s factory. ‘That is a machine that children can send their letters directly to the post office at the North Pole.’

There is no way any child could possibly walk past that without wanting to send a letter! 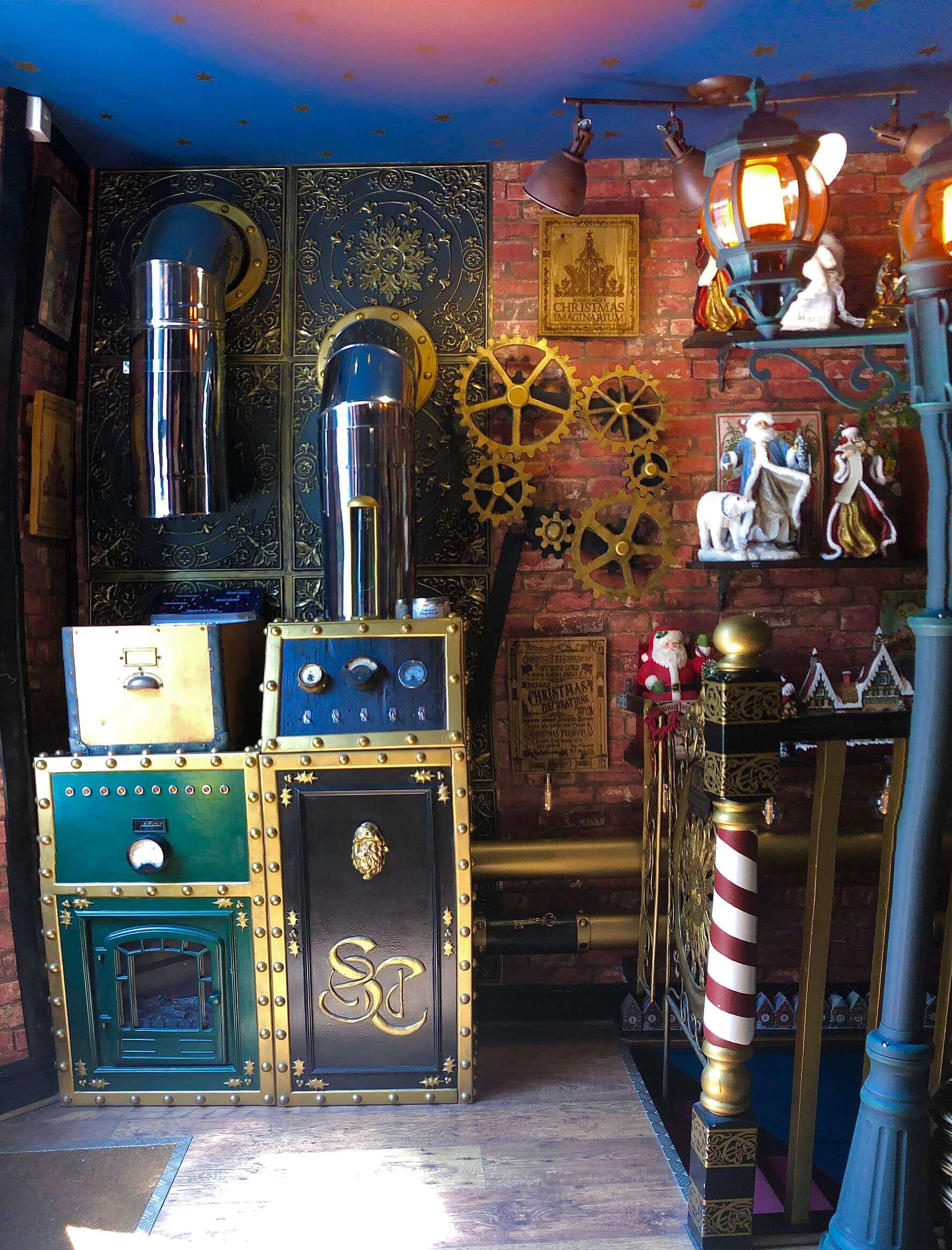 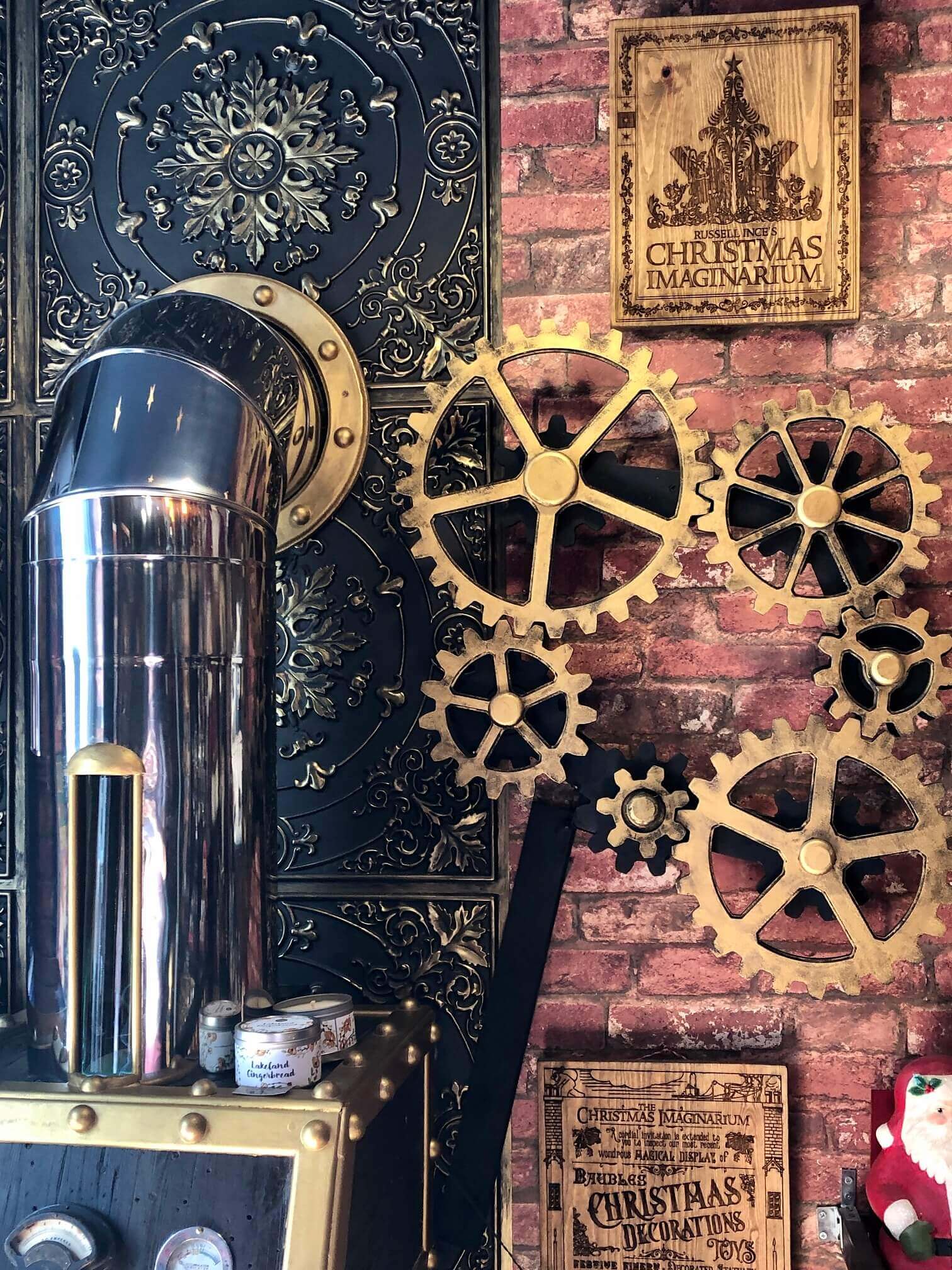 Looking to update your Christmas décor for 2021?  We have the lowdown on all the latest festive styles & products.

‘it becomes a gathering place’

The Shop Is An Oasis

Christmas is a serious business for Russell.

‘You’ve got a responsibility as a Christmas Shopkeeper’, he explains, ‘[Out of season, the shop] becomes a bit like an oasis, a gathering place … It’s just lovely to be able to kind of link [Christmas enthusiasts] together and give them somewhere where they feel they can express their love [for Christmas] and talk about it.’ 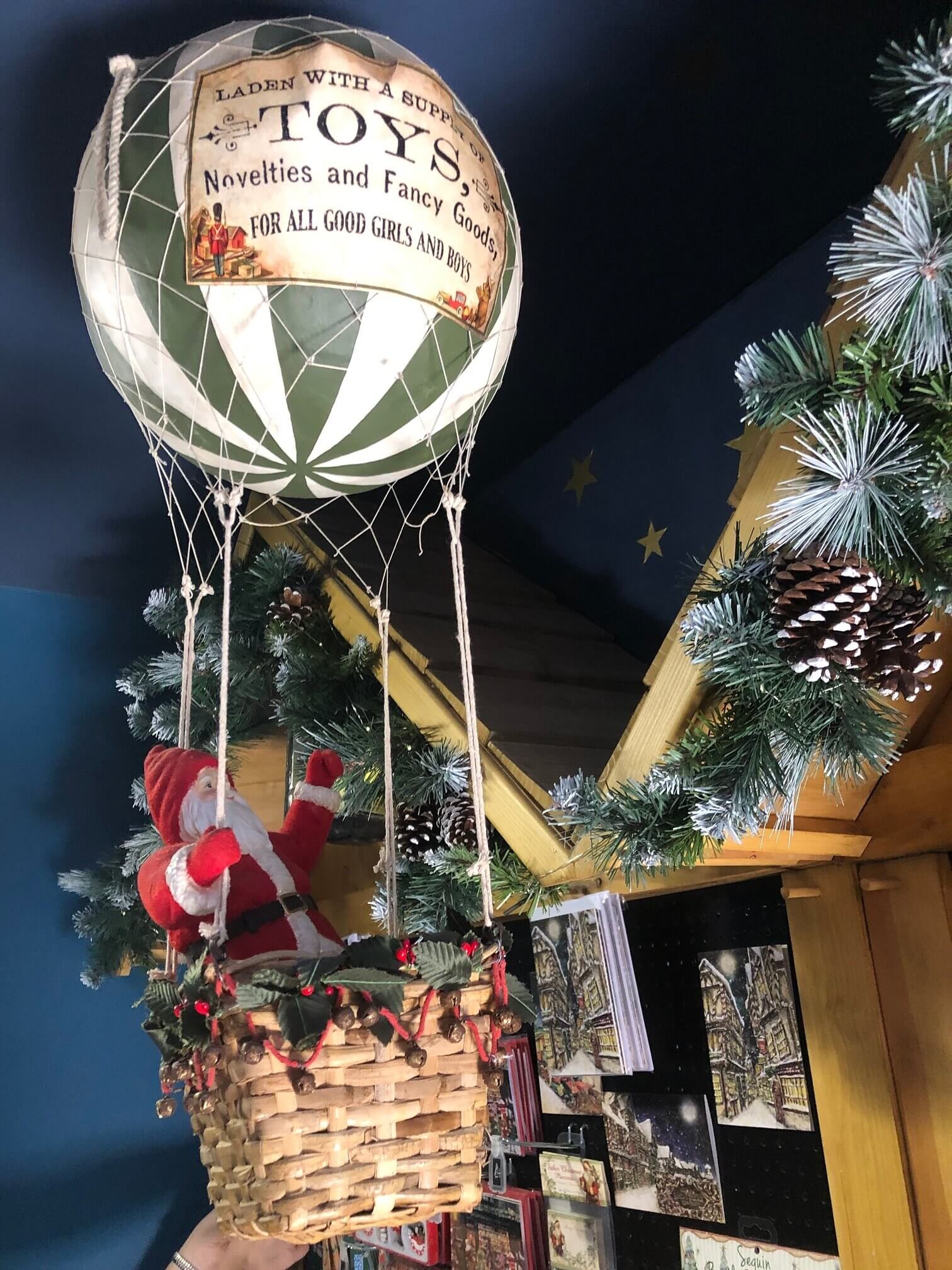 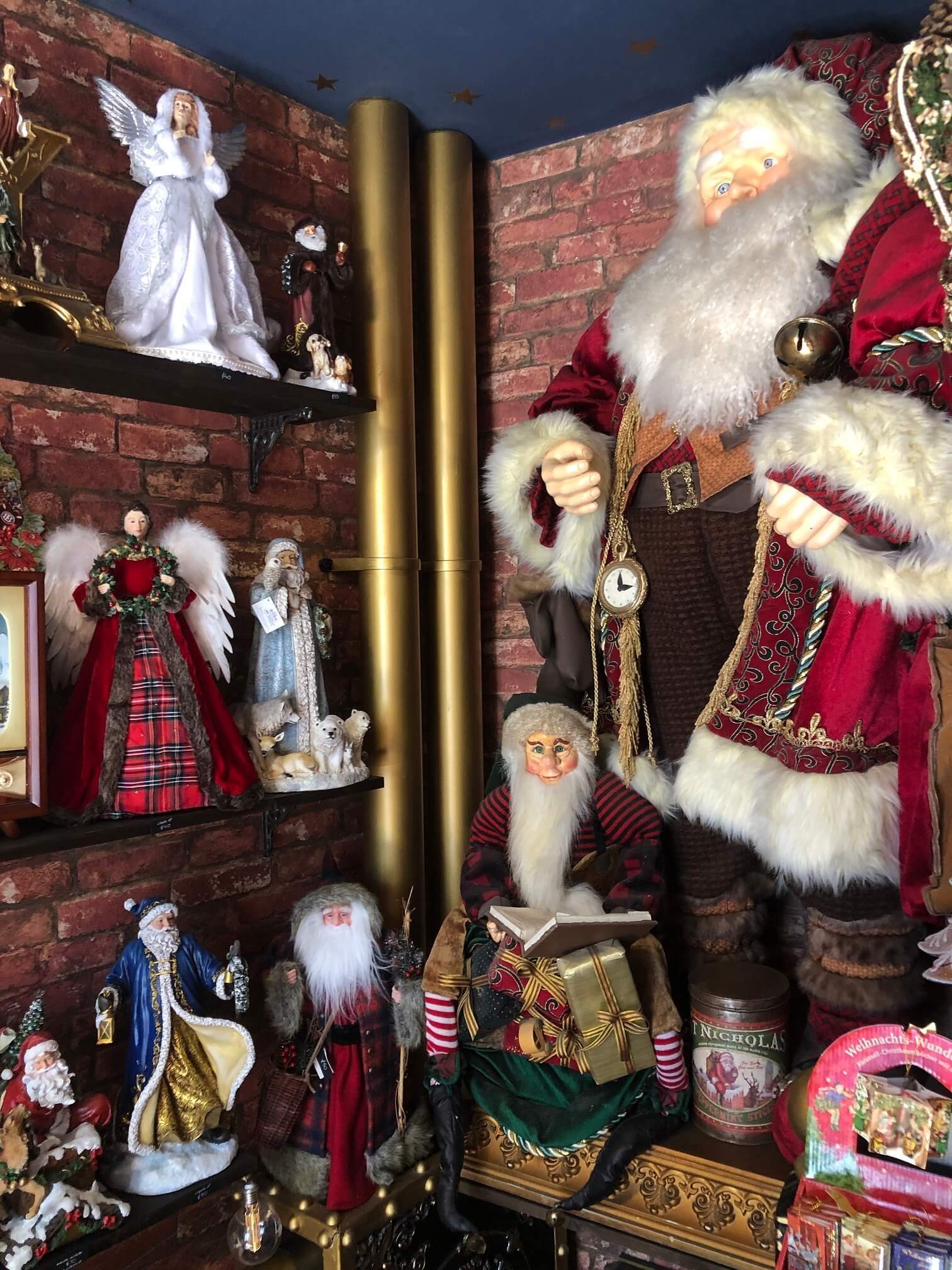 And The Christmas Imaginarium has had a hugely positive impact on his work as a writer as well.

‘You learn about Christmas by talking to people, so you come to understand what inspires people, why they love it and what makes it magical for them.  And that information is key to helping us deliver the right things to help… It becomes a cycle.’

Well we’re certainly hooked.  Excuse us whilst we go write our letter to Santa… 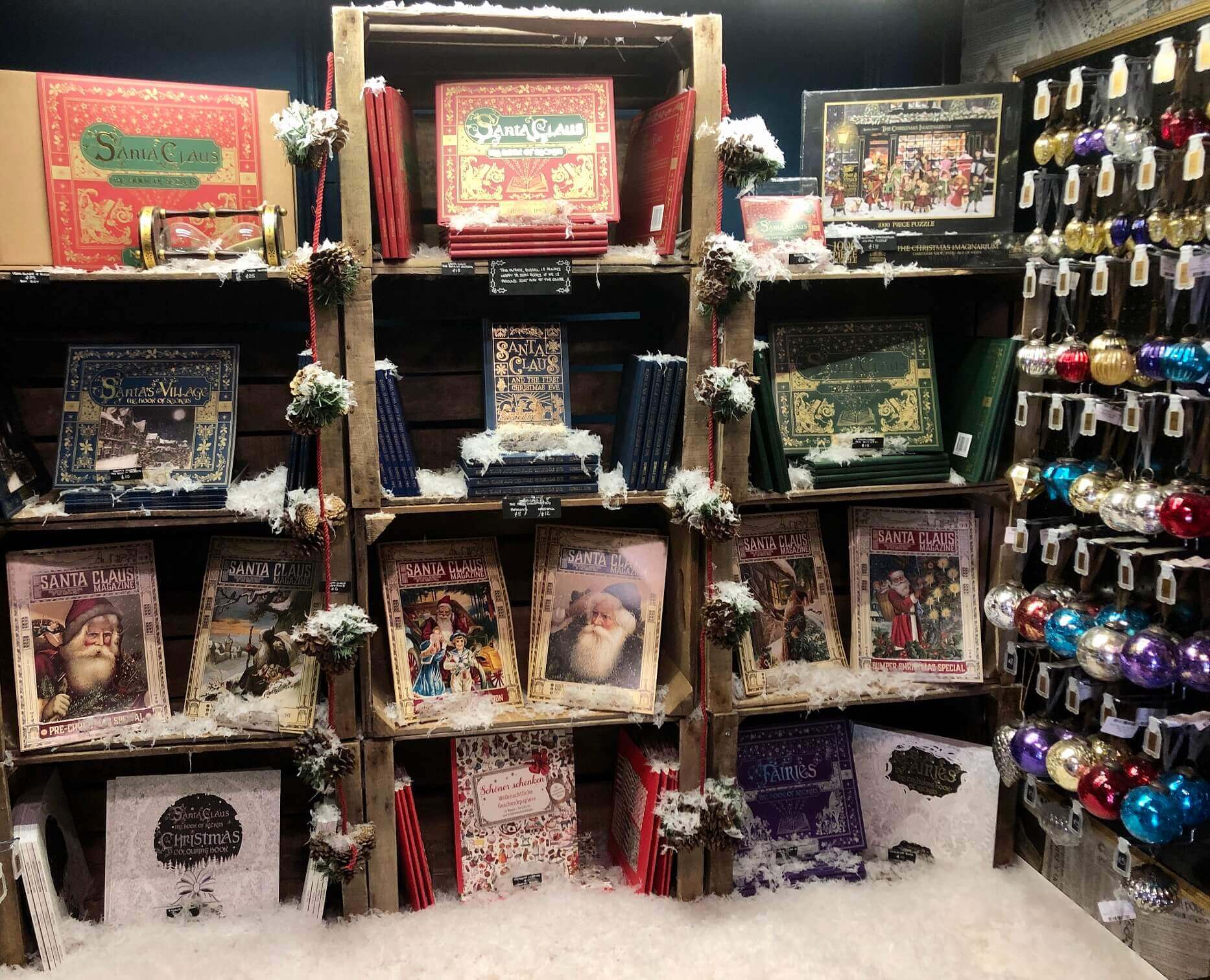 PERFECT FOR: Something a little bit different and the chance to meet Santa’s Official Biographer!

And be sure to tag #jollyfestive in your photos.  We love to see which Christmas activities you’ve been enjoying!

Check Out Our Latest Inspiration 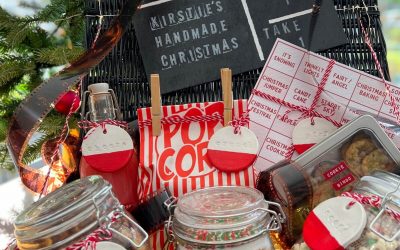 ** AS SEEN ON KIRSTIE’S HANDMADE CHRISTMAS ** Get inspiration for a Movie Night Hamper (and recreate the one we made for Kirstie!) 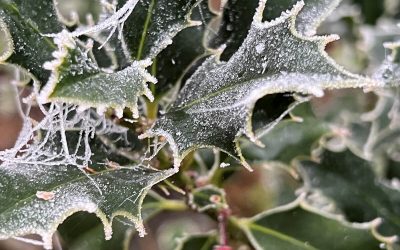 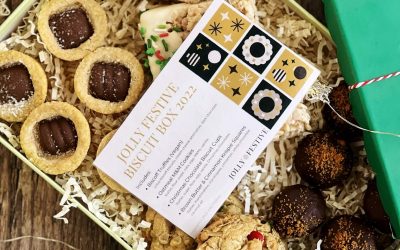 The moment you’ve all been waiting for, Jolly Festive’s 2022 Christmas Biscuit Box has arrived and there’s something delicious for everyone! 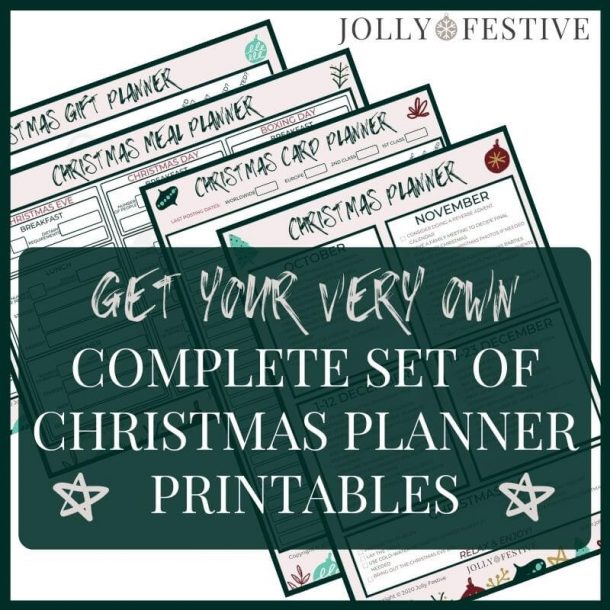 SNAG YOURSELF A COMPLETE SET OF CHRISTMAS PLANNERS (FOR FREE)!

Keep on track with our Christmas Planning Checklist.

Whether you're looking for a Christmas card planner, gift manager or menu designer, we've got you covered.

Subscribe for free access to all our planners as well as all the latest Christmas news & inspiration delivered directly to your inbox.

We've even added in a special bonus just for you:

The Essential Guide To The Christmas Day Toolkit

It's a must-have for Christmas Morning - you can thank us on Boxing Day ;)